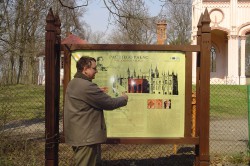 Since 1999, the owner of the school and its surroundings together with the ruins of the palace is the District of Suwałki. Since then, the local government conducts research and conceptual work on the preservation of the heritage of General L. Pac and popularization of his achievements.
In May 2006, the whole of the park and palace design was tidied up and a few kilometre route was traced: a didactic path with 32 information boards on the local nature and history. Opening of the path for visitors was accompanied by publication of thematic postcards with historical contemporary views of Dowspuda and its environs, and the Pac’s coat of arms.
Annually held in Dowspuda are county harvest festivals called “A Visit to Pac” with accompanying various events (eg. theater and dance performances, plays and exhibitions). 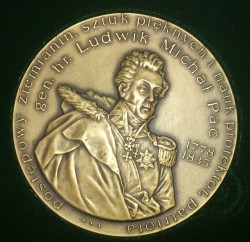 Since 2005, the Starost of Suwałki awards commemorative medals to selected persons in recognition for their contribution to the development of the district. The obverse bears the image of General L. M. Pac with the dates of his birth and death surrounded by a paraphrased fragment of the epitaph inscription on his tomb in Smyrna (now Izmir): “… progressive landlord, arts and sciences protector and patriot”. The reverse bears the image of the district coat of arms and the words “DISTRICT OF SUWAŁKI “.

Since 2009, the District Office of Suwałki and together with the local government of the Podlaskie Voivodship organize in the Suwałki district the European Heritage Days. Pac’s heritage has always been present during all their editions and since 2011 it became a dominant motif. An integral part of the two-or three-day event are visits of the representatives of the local authorities of the District of Suwalki, Podlaskie Voivodeship, and historians from the Suwalszczyzna to Lithuania and Belarus under the general slogan “On the Trail of Pac Family Heritage.” Their goal is visiting the places and objects connected with the Pac family in Lithuania and Belarus (including Jezno, Pożajście, Różanka, Vilnius) and establishing contacts with the local communities interested in cultivating the traditions of this family. 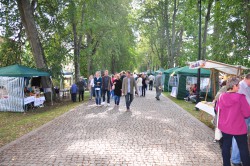 In 2010, Dowspuda hosted a scientific session titled “The Historical Figure of Count General Ludwik Michał Pac in the Context of the November Uprising. ” Delivered in the course of the session papers were published in a publication titled “Gen. Count Ludwik Michał Pac. Patriot – Soldier – Reformer, Dowspuda 2010.

In 2012, the District renovated the historic avenue leading to the remains of a palace – installed was lighting and the surface of the avenue was renovated. In 2014, we shall see the completion of the renovation of the historic guardhouse to be used as the Tourist Service Centre. In the future, the district self-government will continue their efforts to acquire new funds to finance and restore the preserved ruins of the palace.