Established by Ludwik Michał Pac, the Dowspuda park followed in detail the obligatory for the times landscape style of horticultural art, called “beautiful.” The style broke away from the Arcadian pastoralism and referred to the popular in the 18th century England grand, sometimes covering dozens of hectars, park designs. The parks designed according to such principles used the naturalistic advantages of the land with a limited intervention of man’s hand. Therefore the vast spaces of the Romantic parks that included meadows, fields and woods. The proper horticultural elements were quite modest and concentrated around the palace building. They included flower beds (in different sizes), water devices and architectural and sculptural ornaments. An expert on ornamental gardening, Gerard Ciołek, describes the Dowspuda park in the following words: “Well-known for its beauty large Romantic garden in Dowspuda, founded by General Ludwik Pac at his palace […]. Numerous canals and ponds fed by the waters of the Rospuda River towards which the garden descended in broad terraces. The design was partially destroyed during the war of 1830-31”. The Dowspuda park was the work of an Englishman, John Heiton. 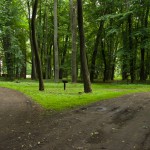 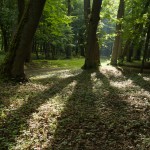 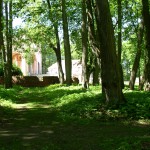