General Ludwik Michał Count Pac was the last male member of the Pac family. He was born on 19 May 1778 in Strasbourg. He was the son of Michał, Starost of Kowno, General-Major of the Lithuanian army and Ludwika nee Tzyenhauz, daughter of Michał, Starost of Posole and Barbara Syberg. The parents’ marriage ended in divorce in 1785. The minor Ludwik Michał was taken care of by his mother’s brother, Ignacy Tyzenhauz, Starost of Posole. Ludwik Michał received a thorough international education.
In 1804-1805 travelled to France and England. The years 1808-1814, Ludwik Michał Pac spent fighting in the Napoleonic army. After his return to Poland, in 1815, Ludwik Michał started his intensive efforts to devolop the Dowspuda estates both economically and socially.
On 27 November 1817, the Count married Karolina Małachowska, earlier however he had tried to win the favour of Anna Sapieha which led to a duel with his rival, prince Adam Jerzy Czartoryski. He started his courtship just after his return to Poland. But, it soon turned out that it was not going to be an easy one, especially, after it appeared that there was a rival, and a prominent one, prince Adam Jerzy Czartoryski himself. Eventually, Sapieha chose the prince and Pac feeling offended by rejection challenged the prince to a duel. At this moment the affair became an object of popular interest. The rivals fought at least two duels whose results were known. According to some reports the rivals met as many as five times. The romantic aura surrounding the quarrel earned Pac the nickname “Othello”. The first duel ended probably with Pac being wounded and his declaration that he would fight again as soon as he recuperated The affair caused so much sensation that Tsar Alexander I himself took interest and issued an order banning another duel. During the last duel which took place, interestingly enough, after the weddings of both rivals, wounded was the prince.
Pac had two children from his marriage to Karolina: daughter Ludwika and son Jerzy (died during childhood). Also before time, barely 5 years after their marriage, died also Pac’s wife. In his wills Pac made his children the main inheritors of his large fortune.
Ludwik Michał Count Pac was a vice-president of the Agricultural Society in Warsaw. In 1817, the general diet of Wilno delegated him to plead with the Tsar on the issue of improving the living standards of peasants by introduction of a rent system and enfranchisement. 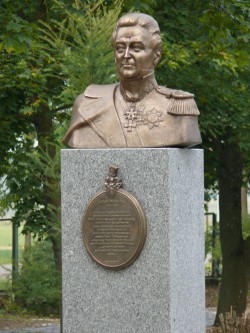 In 1824, Ludwik Michał Pac was granted officially the title of a count. Next year he became Senator – Castellan of the Polish Kingdom although the Tsar had rejected his nomination three times. He was not involved much in the clandestine activities. In 1828, as a member of the Parliamentary Court, he voted against treating the activities of the Patriotic Society as high treason. Instead, he called for the lowest possible punishment of the accused. Ludwik Michał did not take part in the ceremony of crowning Tsar Nicolas I as the Polish king. This was noticed by the Tsar who ordered the crown prince and his entourage to visit the Count in Dowspuda.
On the outbreak of the November Uprising he joined the Administrative Council and during the absence of General J. Chłopicki, became the Chief Commander and since 12 December a member of the Council advising the dictator. On 25 January 1831, he signed the act of dethronement of the Tsar. He declared to pay for the national cause the sum of 100 thousand zlotys, more than any other senator. In February 1831, on the outbreak of the war, Pac returned to active army service. Since 15 March he commanded the reserves of infantry and since 29 April all reserve forces on the left bank of the Vistula. In May, he commanded the Reserve Corps and on 26 May he took part in the battle of Ostrołęka during which he was heavily wounded.
On 28 May he was granted the title of Senator-Voivode. In the wake of the surrender of Warsaw, he left the capital together with the government and the army. He took part in the last war councils, a paragon of indomitableness and honour, he remained in the army until the end.
For his involvement in the January Uprising, the Tsarist authorities confiscated his estates. General Ludwik Michał Pac died in emigration, on 31 August 1835 in Smyrna (now Izmir), Turkey and was buried in the courtyard of the Monastery of St Polycarp. He was the last male member of the ancient and noble Pac family.