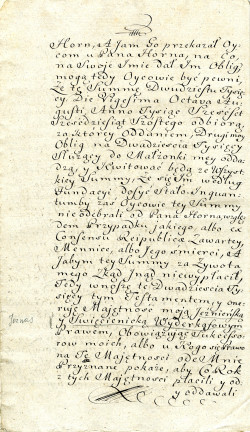 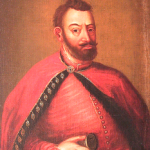 Krzysztof Zygmunt Pac bequeathed his Jezno estate to the grandson of his distant cousin, Mikołaj Andrzej Pac (d. 1713). Jezno is also connected with the lives and activities of his son Konstantyn Antoni (d. ca. 1720), his grandsons Antoni Michał (d. 1774) and Michał Pac (1754-1800), and his great-grandson Ludwik Michał Pac (1780- 1835), and a number of not mentioned here members of the Pac family. Jezno and Dowspuda are not only related by the last descendant of the Pacs – Ludwik Michał, but also by Stefan and Zygmunt Pac who jointly administered Jezno, Dowspuda and Janówka.
Stefan Pac stayed in Lithuania in 1633, 1634, 1635, 1639 and 1640. For the same years falls his management of important affairs connected with Jezno. He took over the Calvinistic congregation and converted it into a Catholic one, making a provision in his will for the construction of a new church and started the construction of the brick palace.
Krzysztof Zygmunt Pac following his father’s will, Stefan Pac, built in Jezno a church, consecrated in 1670. He also founded the monastery in Pożajść. He completed the construction of the palace in Jezno. The palace, in its style, followed a similar Radziwiłłs’ family residence in Nieśwież, famous for its grandeur and splendour. 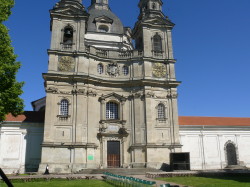 In K. Z. Pac’ time, created was the Pac county and the complex of the Jezno estates. In some of them, Pac introduced rent payment or lease for peasants.
Ludwik Michał’s parents, grandparents and great-grandparents contributed to obtaining privileges for organisation of fairs and farmer’s markets; they reconstructed the church in Jezno 1678-1772, built the mausoleum of the Pac family, renovated the palace and constantly supported the Pożajść monastery.

Chapel of the Pacs in Jezno church

The chapel of the Pacs was founded in 1768-1772, during the renovation of the church. The following members of the Pac family were interred in the chapel and later transferred to the vaults of the church:

Altaria of the Pac Chapel

The Altaria of the Pac Chapel was recorded in the church registers as “Pacogrobowska” [“Pac-tombs”]. It was founded in 1754 by Pac’s wife herself, Teresa Radziwiłł, and in 1765, Antoni Pac confirmed the foundation.
Antoni Michał Pac supported the foundation with the sum of ten thousand of zlotys in gold. “The monies came from the Jezno estates. The altarist of the Altaria was to celebrate three masses a week for the souls of the church founders.” The Altaria worked until 1850.

The Library of the Jezno Manor